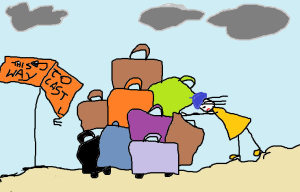 I love Edinburgh most of the time, but during the Festival it doubles its number of inhabitants, which means a distance I could once walk in 5 minutes I now struggle to complete in 5 hours.

So there we go – first written formal warning from BlueBeretMum.

Oh how I loathe thee at times.

Your obvious ignorance to the rest of  us, the non-tourist population.  Snail – steps and that indecisiveness as to whether to walk into a shop or stand outside and block everyone else’s chance of doing their shopping/passing by and getting home before their blood sugar levels get so low that they will collapse in the street in front of you.

You see, if someone is walking very fast with a roaring toddler in their buggy it probably means only three things: they are in a bloody hurry, yes, they are local and no they have no idea where that café from your guidebook (11th edition from 1999) is, and they are probably late so no they cannot spend the next 100 years trying to figure out where it is you should be right now (that makes four things but I don’t care).

The truth is that you, your family and that herd of Highland cows that you got on sale during your two hour trip of All Things Worth Seeing in Scotland (the cows, the hills and the Loch Ness monster) are taking up public pavement space.  The rest has been monopolised by a woman with 1,000,001 piercings in her face, a dubious Spanish singer, an incompetent belly dancer and a guild of pickpockets, which means that plain pedestrians like me have to either develop a superpower to fly or use whatever means they have to make any headway.

In my case, the weapon of choice is German and it has four wheels.  The Hauck Shopper buggy has brought down a barrage of luggage and de-heeled the owners on a few occasions.

Not everyone speaks English but if you hear a loud voice behind your back, followed by ‘Raaaaaaaaaah raaah raaaah’ that may imply that someone is trying to tell you something, like ‘Get out of our way or Peanut will miss In the Night Garden and things will get NASTY.’

On the other hand, I must admit that not all tourists are bad and some representatives of your species have provided me with an endless supply of giggles and party jokes.

Life is full of trials and tribulations and I feel for your dilemma:  ‘Should I get a cashmere scarf or shawl?  Do they sell them in pink?’

Alex Salmond is bound to love this great feedback on one of the famous visitor attractions: ‘How convenient they built that castle so close to the shops.’

There are more similar quotes of random spontaneous wisdom that make me question how we, the supposedly thinking kind, manage to get by from one day to another but my bruised subconscious has erased them all in a heroic act of self-preservation.

I understand you are on holiday.  You have never been to Scotland before.  You are in no hurry and want to cherish the sweet moment of admiring the intricate display window of Primark.  You perambulate up and down the Royal Mile in hope you can spot the Queen stuffing her face with the heavenly Edinburgh fudge.

Please, be my guest, take your and my time and have a good long look at the legendary tram works and the workers digging yet another hole in the ground.  Yes, pay extra attention to the famous cracks on show (no, not the pavement ones).

I really understand all that.  After all, I have been on holidays myself (believe it or not) and I cannot read a map to save my life either, but please have mercy because that woman with wispy hair and mad confused expression on her face has probably endured a morning of having bananas rubbed into her only clean pair of trousers and a mini toothbrush shoved into her ear.  Then she spent 45 minutes chasing a toddler around her house.  Said toddler decided to go to nursery bum-bare.  Then he decided to hide.  Toddlers are pretty clever. They can squeeze into fairly small spaces like the washing machine, the kitchen cupboard, the bin and the favourite of all times, the toilet bowl.

So that woman lost all her patience within the first 63 minutes of her awake time.  Now anything else means war.

Every good relationship is about compromise, as in ‘If you move your pile of rucksacks, shopping bags and other travel attire by 2 millimetres I could just squeeze through without risking getting run over by a taxi driver who does not seem to have a great start to the day either.’

Please don’t get me wrong.  I support tourism and the livelihood it provides with all my heart.

However, hell is other people with suitcases on wheels, so dear Edinburgh (Festival) Tourist , I am asking you nicely.

Please get out of my way.

I will not repeat this request. Again.

I am off to rub some oil into the wheels on Peanut’s buggy.

Yesterday I was rushing to work down North Bridge, striding by hundreds of small independent shops their display windows and in one of those windows I saw something/someone that made me put on the brakes and stop.

In said window I saw a monstrosity.

Wispy hair flying in all directions, covering up most of its flushed face (that wasn’t that bad though considering any woman in Edinburgh who doesn’t transform her hair into a cement helmet before she leaves her house suffers similar image distortion) and a hunched back, dragging a huge red sack behind it.

Half woman, half Quasimodo.

Poor, pitiful soul I thought. Aged before her time. That hair. That bent back. Those mismatched socks and banana smeared on the back of her black skinny jeans.

I looked closer and so did the Quasi-woman. I moved the hair out of my eyes and so did she.

I covered my mouth and my eyes filled with tears. I was staring my crooked posterior in its face back.

‘Why me?’ I bemoaned my fate. I do yoga (occasionally), walk at least an hour a day and I have never been to Paris, let alone seen Notre Dame (I’ve read the book though so it’s almost like being there but cheaper and without all the hassle).

Then it dawned on me. It wasn’t my fault or bad karma.

It was my bag or rather the weight of it that made me sport a posture aged well before my time (for the curious among you, I am approaching mid-thirties at a snail pace which translated into the modern attitude are the new late teens but with better skin and more life wisdom, ahem).

My handbag is the evil of all evils.

Raspberry red, faux leather, bought on sale in Poland because I refuse to spend an amount of money that could just about pay off the debt of a small developing country for what basically are two squares/triangles or circles stitched together, with or without a strap attached to them.

On a good day I’m about 1 meter 63 centimetres tall. The bag is half my height. Sometimes I use it as a shield against dragons and confused annoying tourists.

It weighs about as much as an adolescent blue whale.

In a desperate attempt to save my spine, give the vertebrae some rest and send my shoulders on a well-deserved holiday I decided to do what I haven’t done in the last 3 years.

I opened the zip, turned the bag upside down and emptied its guts onto the dining table.

Here is what I found:

1. A spare (clean) nappy – you never know when you are going to need one

2. An impressive collection of Calpol spoons and syringes (some had attracted all sorts of crumbs and alien forms of life)

3. A lipstick (I’ve been searching for it for years), and 4 different lip balms (some vintage)

6. A paperback collection of poems (estimated weight –about 10 kg), two average size hardcover notebooks, a diary from two years ago, three pens, an Ikea pencil (I haven’t been to Ikea for the last decade) and Harry Potter’s magic wand

7. An iPod, iPod charger and headphones

9. A mobile phone and all the singles socks that the Washing Machine Monster scoffed and spat out into my handbag

10. About a million paperclips, a hairbrush, a few hair bands and hair clips

11. Bills dating back to 2001 and a bunch of receipts (Christmas shopping)

12. A live chicken, half a cow and a folding bicycle

13. Today’s groceries – a tub of formula milk, a bottle of vodka and a supersized loaf of bread (because you can never have enough bread)

14. Wooden pegs, Korean banknotes and Japanese coins (a remainder from a holiday two years ago and I didn’t even own that bag then)

15. A warranty book and instruction manual for Peanut’s car seat
‘Time to do something about it. Time for a change’ I said to myself.

…I put it all back in, just in case one day I HAVE TO read a poetry book while I am cycling to visit my parents in Poland and decide to take a detour across South Korea and Japan.

As you can see, dear reader, this is a lifelong crisis. My handbag has become my personal black hole swallowing any debris that comes its way.

My backbone’s ball and chain pulling it into disrepair.

If you can break my habit of using my handbag as my home/office/library/warehouse you can probably bring peace to this shabby world too.

As a prize for this impossible achievement I will offer you a live chicken, half a cow and a few wooden pegs as a bonus.

Many have tried and failed. Miserably. The author herself included. 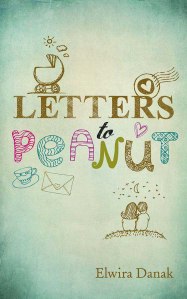 Don't forget to lick your cuticles.

Down the Language Hole

Linguistic musings about words, life and everything.

stories, pictures and cooking tales from an english woman living in rome.